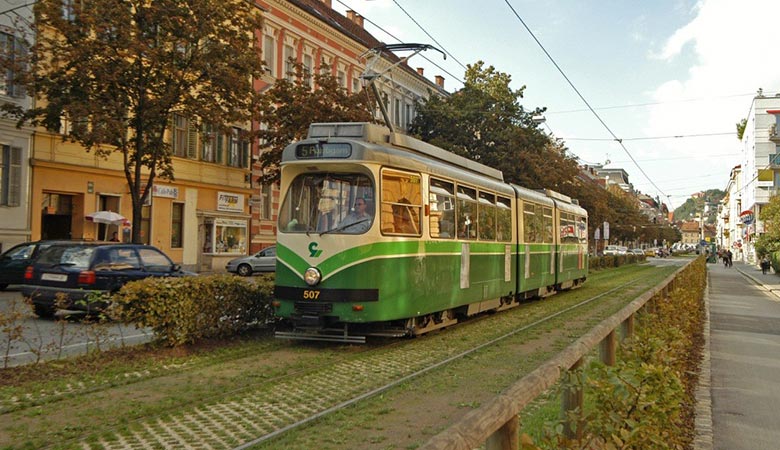 Tramway transport Graz established 1878 in Graz as horse tramway. Trams operated by electricity since 1898 have a route network of altogether 66.4 kilometres of length. The Tram is chaired by the Grazer transporting enterprises (GVB).
On the tramway network consisting of eight lines annually approximately 52 million passengers are carried. All lines lead from the central Jakominiplatz star shaped to nine suburb goals, whereby there are several intersections for the regional and supraregional traffic of the ÖBB as well as to the touristic important Grazer lock mountain railway.

2005 were begun with a development of the tramway network. Some lines were extended. Then the work for the track and road repair works began on 29th June 2005 in the Conrad-von-Hötzendorfstrasse.

Of the GVB for the elastic layer a PU-bound rubber granulates mat from the recycling cycle was demanded. For the fulfillment of the sound-related characteristics an installation thickness of 2x 23mm should be supplied. With this thickness a reduction of the structure borne sound emission must over at least 10dB be given opposite a conventional ballasted track starting from 40Hz. The rubber granulates mats were installed under a 25cm strong unreinforced concrete slab (on which the grooved rails to be embedded).

The dynamic rigidity was allowed to amount to at the most 0,04N/mm³ with an installation thickness of 23mm. The deflection under 25kN/m² should be with 2x 23mm approximately 3mm. Pulsating load tests for 10 millions load cycles between a pressure of 5kN/m² and 18kN/m², 10 millions load cycles in the water-satisfied condition and 100 frost – thaw – changes were done. Further those were proven frost – to de-icing salt resistance after 50 cycles.

Further conditions were placed at the ultimate tensile strength, the elongation of break and accuracy to size. The demanded values were proven by means of an examination of a nationally authorized test laboratory. DAMTEC SBM K – sub ballast mat for this project was supplied in the form of purpose made slabs on pallet with approx. 17,000m².

← Extension of the railroad line U2 in Vienna, Austria Sembrancher Viaduct, Switzerland →